The cultural impact of TikTok goes beyond viral videos, trendy dance moves and memes. The platform has been used to launch campaigns related to the LGBTQ+ community, broadcast the importance of taking care of mental health and support businesses owned by ethnic minorities.

It has also become a space that many turn to for information: a survey found that three-quarters of Generation Z users said that TikTok has helped them keep up with the news, as well as learn about social justice and politics. According to a study by Indigenous Digital Voices, 8 out of 10 Indigenous TikTokers said they turned to or reconnected with their communities and grandparents to generate their content.

We present to you these 5 indigenous people who have crossed borders and have become relevant TikTokers on this platform. 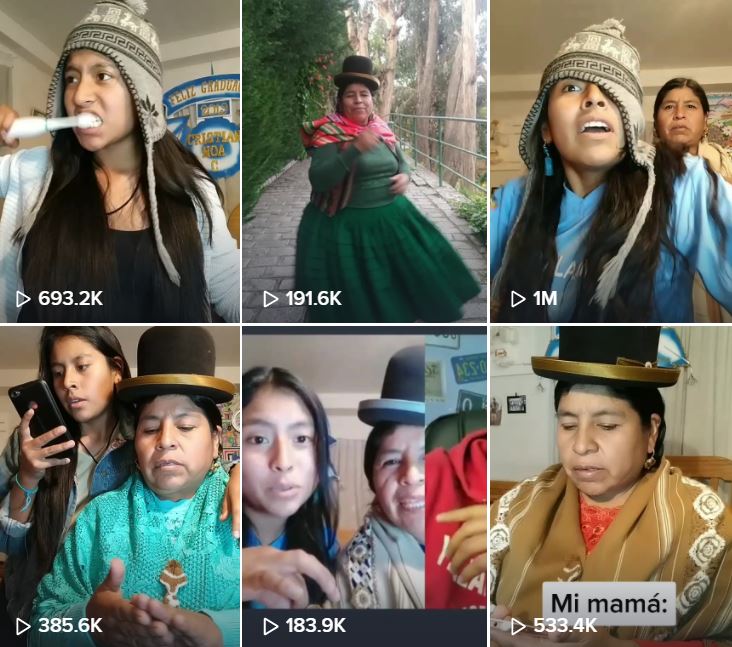 Valeria Calle and Milenka Noa Calle, are mother and daughter, but regardless of blood ties, they share a passion: TikTok with more than 618 thousand followers, mother and daughter have conquered the platform thanks to the sympathy and simplicity of their videos, in which they show off their ability to interpret, appealing mainly to comedy in their content. The videos are varied, but they cannot miss the traditional La Paz chola dress worn by Valeria, characterized by the long skirt, woven blanket and hat. 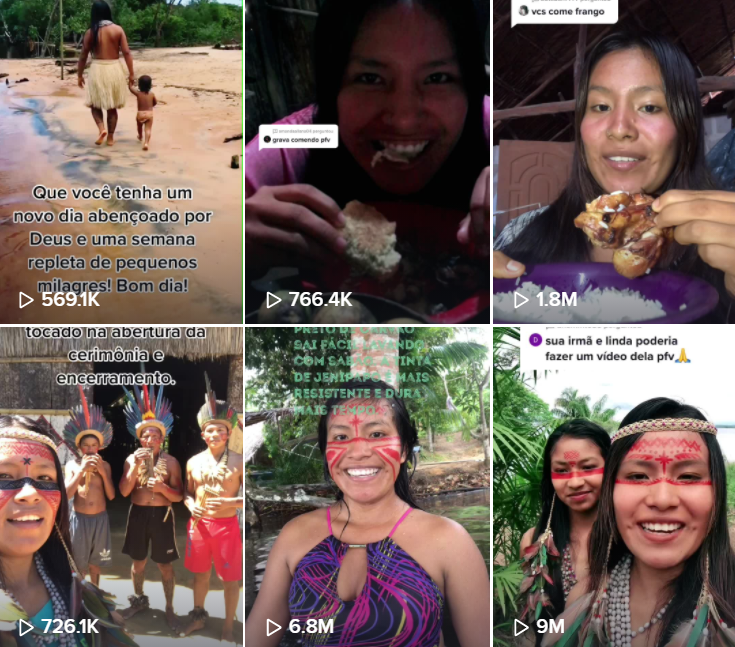 A Young indigenous woman of the Amazon with more than 5.8 M followers, shows traditions which were a mystery for years, now it is possible to know the depth of the Brazilian jungle. In her videos, she shows her family’s routine and the elaboration of typical dishes, the artisanal process of their instruments and the handling of agriculture. Her community is a self-managed place that relies on tourism to survive. That is why Maira had the idea to show their traditions on TikTok. 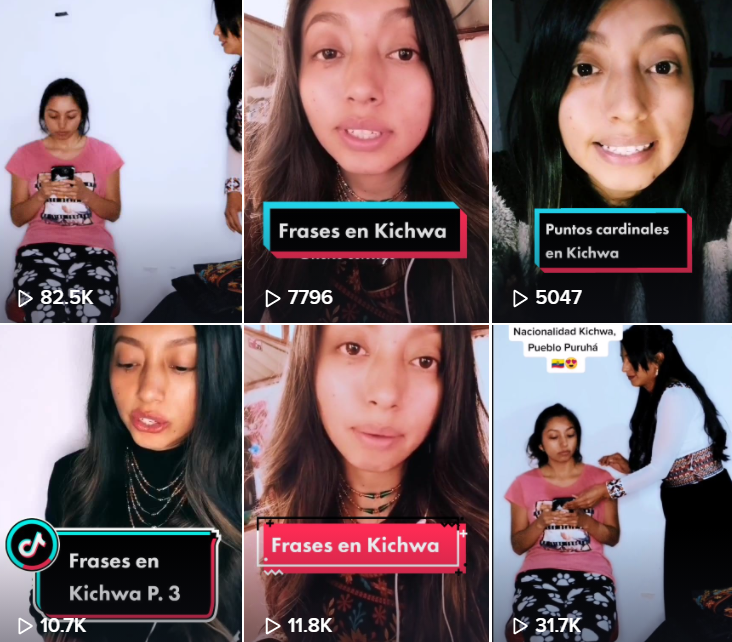 Ecuadorian with just over 33K followers. Her family was the victim of landowners, who took away their lands. Her grandparents worked in those lands and her father fled to study. Many of the women on her land were sexually abused by the landowners. In telling her story on TikTok, she considers herself the voice of her ancestors with the intention of not allowing more abuse from those in power. In her videos, she talks about cultural issues of her region, teaching words and numbers in Kichwa and Waorani with the intention of recovering her ancestral languages. 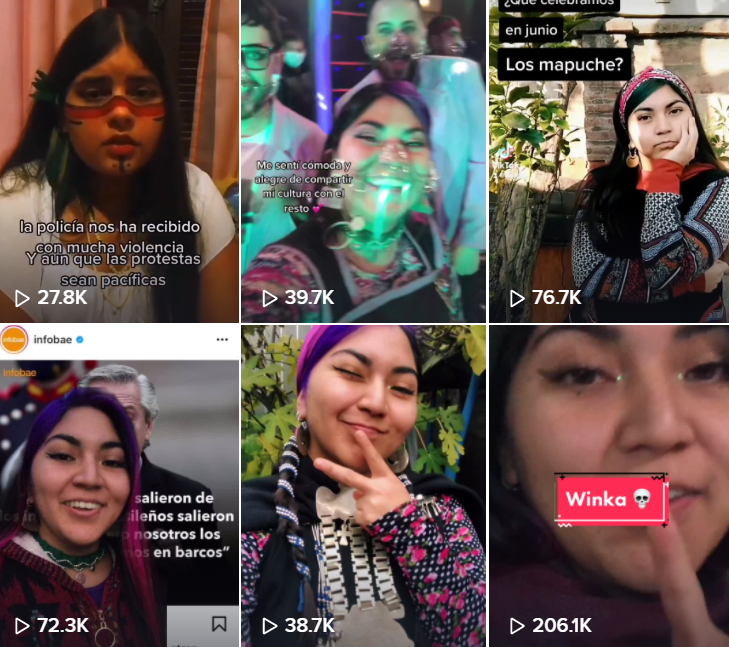 Sofía Huaiquil Queupomil is a 24 year old woman living in Santiago de Chile in the commune of San Miguel. She is devoted to talking about the Mapuche people sharing their language and traditions. Her intention is to show that they are people who are in society. She started making videos when she saw that her community was being discriminated against, finding an opportunity to be visible in society and give her community the value it was missing. 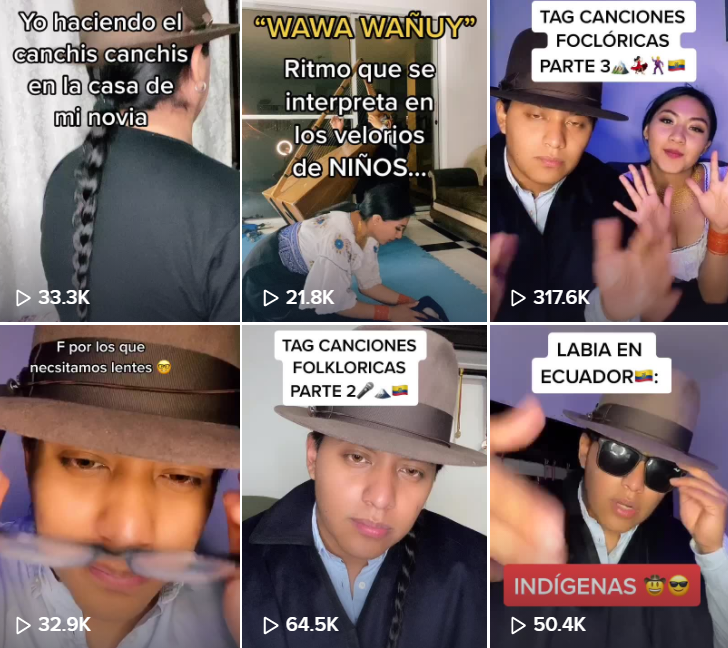 Yaku Pérez, a young Ecuadorian dental student, currently has 28K followers on TikTok. He shares in his content rhythms that are interpreted at children’s wakes, folk songs from the region, the meaning of long hair in indigenous men which represents leadership, respect and wisdom, among other important issues of his culture, showing the pride that he feels in his roots and in being indigenous from Ecuador.

Now that you know a little about these cultures, we invite you to support them and continue to make visible these communities that need us, with the intention of having a voice in our society, being recognized with the value they deserve and the cultural contribution they give us.

Discover more content about the indigenous community and how you can help and download the PerSus app.

Measure and Connect with your Personal Sustainability.

Do you care about your sustainability? Now You Can Do Something About it!

Take Control Of Your Personal Sustainability: Reuse To Avoid Polluting

The Best Gift You Can Give A Child: Share the Passion for Sport

Do These 5 Happiest Cities In America Have The Secret To Happiness?

TikTok: The Future Of Sustainable Fashion

Día de los Muertos Can Help You Cope With Grief and Loss, Here’s Why

7 months ago
Stay up to date

Measure and Connect with your Personal Sustainability.

Do you care about your sustainability? Now You Can Do Something About it!